Hegel’s Absolute Idea is for workers

Posted on May 5, 2013 by franklindmitryev

From the Writings of Raya Dunayevskaya:

On the 60th anniversary of Dunayevskaya’s Philosophic Letters

Hegel’s Absolute Idea is for workers

Editor’s note: Sixty years ago Raya Dunayevskaya first articulated what she later called “the philosophic moment” that shaped her whole body of ideas. We present the Foreword to the original 1955 pamphlet, the first publication of News and Letters Committees, a mimeographed edition of Lenin’s “Abstract of Hegel’s Science of Logic” and Dunayevskaya’s 1953 Letters on Hegel’s Absolutes. The original can be found in the Raya Dunayevskaya Collection #12061. (For the text of the entire pamphlet, see #2431.) Footnotes were added by the editors.

Part I of those Philosophic Notes consist of extracts from Lenin’s Philosophic Notebooks. These were written in 1915, at the time the holocaust of World War I made a shambles of the world in general and of the “vanguard” (official Marxism) in particular. It was at this critical point in history that Lenin felt compelled to study Hegel’s Science of Logic. Far from being an evasion of the political tasks of the moment, it was a recognition that the time demanded infinitely more than the mere counterposition of a correct political policy against a wrong political policy.

What sent Lenin to examine the very foundations of Marxism–its Hegelian philosophic base–was the very fact that he was so shocked by the German Social Democracy’s voting war credits to the Kaiser that he considered the issue of Vorwarts, which announced it, as a forgery perpetrated by Imperial Germany, instead of the actual mirror of the Second International’s thinking.

Those Notebooks mark the great divide in Marxism. They were Lenin’s preparation for his writings on Imperialism and State and Revolution, as well as the actual Russian Revolution in November 1917.

This is the first English translation of the remarks which Lenin made to himself as he studied Hegel’s Science of Logic and History of Philosophy. I made the rough translation of Lenin’s Notebooks in 1948. It is impossible here to reproduce the whole text as it is a book unto itself, consisting mainly of Hegel’s works, with underlinings of all sorts and side remarks and aphorisms by Lenin. I hope the extracts will send the reader to the entire text by Lenin as well as Hegel’s Science of Logic itself.

In 1950, under the impact of the miners’ strike sparked by automation (the continuous miner), I returned actively to the writing of a book on Marxism which I now called “the Lenin book” because I conceived Lenin’s Notebooks as central to the work. I wanted a worker present at the oral presentation of the thesis because the whole point was that unless the most profound ideas of Marx were expressed so simply and directly that the average worker would understand, it had no meaning at all. Otherwise it would have lost all its purpose, for the new impulses can come from nowhere but out of the struggles, thinking, and aspirations of the working class–especially American workers.

Where Lenin, in 1915, could keep his philosophic discoveries in private notebooks, we could not do so in the 1950s. It did not matter in 1915 because by 1917 the Russian workers had, in actuality, transformed the old order. But now that Russia, far from being a workers’ state, is the greatest tyranny on earth, we had to face the question that is in everyone’s mind: what happens AFTER workers gain power? Are we always to be confronted with a labor bureaucracy? Our age has so matured that we must begin with the workers themselves participating in the working out of the philosophic, that is to say, total outlook. That is the reason the recent series of lectures have been undertaken beforethe writing of the book. 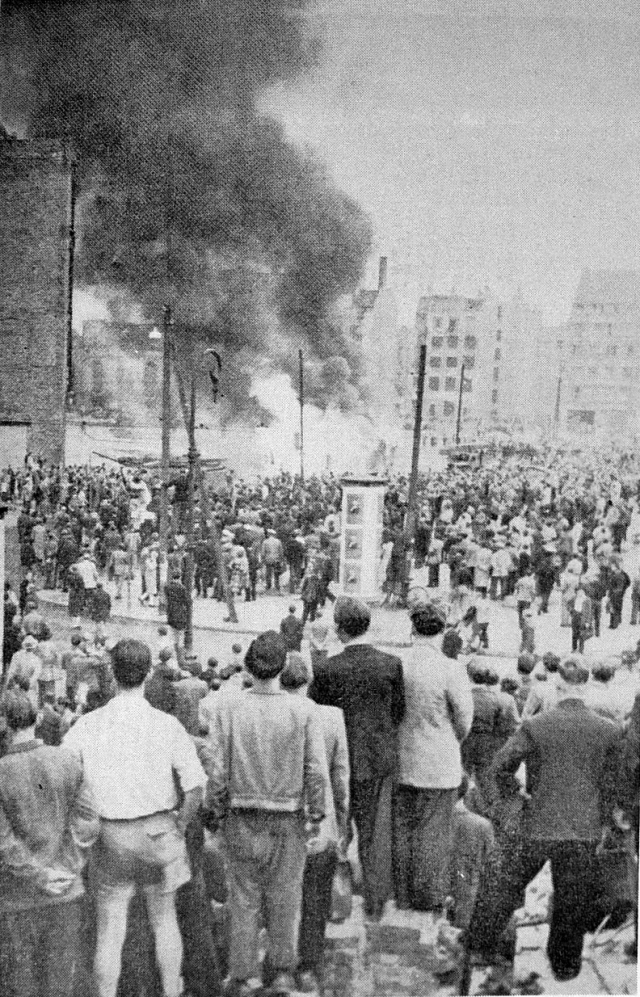 Part II consists of an exchange of letters on Hegel’s Absolute Idea, which I call the concept of a new society. They were written in 1953. That was the year of Stalin’s death, on the one hand, and the East German Revolt, on the other hand. A new era of struggle for freedom opened with the East German revolt, and within a few weeks it was followed by a revolt in the slave labor camps of Vorkuta inside Russia itself. Clearly, Stalin’s death symbolized the beginning of the end of totalitarianism. The maturity of the age could be seen in the fact that the average man on the street and the philosopher were asking one and the same question: Can man be free in this age of totalitarian bureaucracy? We leaped generations ahead when the workers in a satellite country and those in slave labor camps took matters into their own hands and thus illuminated the road ahead to a new society.

1950 had opened a new era in production with the first serious introduction of automation in the form of the continuous miner.[1] From the first industrial revolution, the newly-born factory proletariat gained the impulse to struggle for the shortening of the working day, and thereby established a new philosophy. “In place of the pompous catalogue of the ‘inalienable rights of man,'” Marx wrote in his greatest theoretical work, Capital, “comes the modest Magna Charta of a legally limited working-day, which shall make clear ‘when the time which the worker sells is ended, and when his own begins.’ What a distance we have traveled!”

The second industrial revolution was being translated by the workers the world over into a new humanism. Never have they posed the question more clearly as not being one of material possessions nor annual wages but of conditions of labor in a fundamentally new way of life. Without this universal philosophic form, state capitalism as a tendency would remain economist and incomplete. Although we, as a state capitalist tendency, had been saying for years that we live in an age of absolutes, that the task of the theoreticians was the working out materialistically of Hegel’s last chapter on The Absolute Idea, we were unable to relate the daily struggles of the workers to this total conception. The maturity of the age, on the other hand, disclosed itself in the fact that, with automation, the worker began to question the very mode of labor. Thus the workers began to make concrete, and thereby extended, Marx’s profoundest conceptions, for the innermost core of the Marxian dialectic, around which everything turns, is that the transformation of society must begin with the material life of the worker, the producer.

In 1953, when we were preparing to come out with a paper [Correspondence] that would be a break from all previous radical papers, I turned to philosophy and saw in the Absolute Idea the breakdown of the division between theory and practice in the movement for total freedom. What was new was that there was a dialectic not alone in the movement from theory to practice, but from practice to theory. That, in essence, was the gist of the letters to Hauser,[2] the philosopher-designate, who, after demurring a day or so, came back, with her usual hyperbole: “I think that these notes represent our Philosophic Notebooks, comparable to those of VL in 1915.”

Johnson,[3] the titular founder of the state capitalist tendency, however, had other ideas. He never acknowledged receiving the letter, and when Hauser came to him with enthusiasm for all the “discoveries” I had made, he managed to shut her up too. What had previously been a literary clique now became a philosophic clique as well.

The titular head of the state capitalist tendency, far from looking at the stage of production and stage of workers’ revolt, was busy examining the “social personality” of “original characters” and the “uniqueness” of the great literary writers, to which the new humanism of the great East German Revolt played a secondary role.

It is high time to abolish the division between the “theoretical leaders” and “the rank and file” as well as between “the inside” and “the outside.” While the form in which the ideas first evolved in the mind of the author is rough and even abstruse, no stage in the evolution of the book need be kept private. These notes and these letters are being published for all who are interested.

1. For an account of the miners’ revolt against the new machine, the continuous miner, see Andy Phillips and Raya Dunayevskaya, The Coal Miners’ General Strike of 1949-50 and The Birth of Marxist-Humanism in the U.S. (Chicago, News & Letters, 1984).

2. “Hauser” was the organizational name used by Grace Lee Boggs in this period.