New York, N.Y.—Rallies and protests were held at over 30 New York City schools on April 11, the first day of state-enforced mandatory standardized English language testing. At every level of the educational system—from grade school children at Public School 87 to students at many New York high schools—protests were loud and vehement. 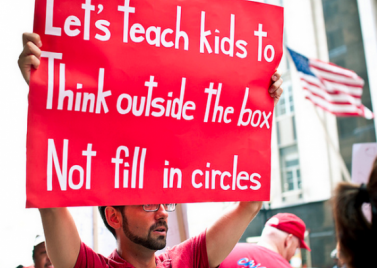 At Public School 87, Principal Monica Berry told a local news station, “We’re not sure if the results will actually reflect what the children truly know.” The head of the school PTA said, “Parents are not allowed to see what’s on the test, teachers are not allowed to see the graded tests that their students complete, so we are asking for transparency.”

Test questions and test results are secret. For third graders, the first time they know if they passed a test or not will be when they are told they cannot advance to the fourth grade. Many students complained of the incredible stress and tension that the tests caused them. But state officials, following the lead of the Obama Education Department, defended the test and the similar math test which was held at the end of April. Parent Michelle Lederman noted: “They were being told, this may affect your promotion, this may affect whether you can go to fourth grade, you may have to go to summer school. A lot of pressure for young children.”

Protests were also held in schools outside New York City, part of a broader national movement against this bastardization of the educational process. Standardized testing creates the need for rote learning, depriving teachers of the right to truly teach and depriving students of the right to an education that promotes human values and intellectual growth. The existence of this new movement is a sign that many of those affected by the negative educational policies of the last two decades are rising up and saying, “No more!”